Mr. Banker, time to rethink hiring a book of business

by George Self | Uncategorized 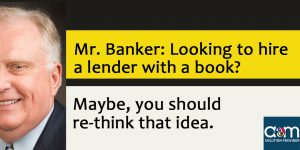 The traditional bank practice of hiring a commercial lender who will “bring his book of business” has become a risky proposition.

Late last year, the Federal Reserve clobbered two bankers with a double whammy: first the bankers got hit with a six-digit fine; second, over the same issue, the Fed is insisting on a life-time ban on each banker.  Why?  They conspired to give a confidential information (customer lists and details of customer loan) to a competitor. (While there’s no excuse for the misconduct, a $2.2 million fine plus a permanent ban is breathtaking—and grounds for pause.

FIRST: this deal went down in Wyoming.  Not exactly a money center. So, is the Federal Reserve signaling a crackdown on insider abuse?

SECOND: a bank should be damn sure they pay attention to the exact nature what any new hire is bringing to the table.  It would be very smart to have legal counsel review the deal before any agreement is reached

There’s more to this than can be covered in 1,300 words. (Read the filing) Suffice it to say, bankers have been warned.

← A paean to determination Not so fast OCC and CFPB →